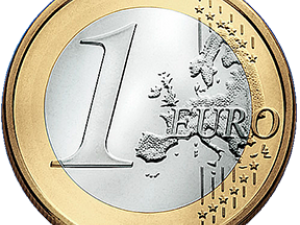 “1 EURO.”  The coin says it all: a common currency for a common market, silver by gold encircled (or nickel by copper), unity to the fore. The currency name, like the 1992 Maastricht Treaty at which it was proposed, spells European Union, one Europe. The coin, first circulated in 2002, on closer inspection reveals a map: a stylized geography of territory, lacking individual national boundaries. The Eastern frontier swings down from Sweden to Greece, bisecting Turkey (no trace of Africa on this map). Twelve stars limn the design, above and below the “Euro” text. Like the twenty-four stars of the Paramount Pictures logo (I irreverently think), though here with legitimate political reference—to the twelve member-states at Maastricht.
Another collective grouping, the United Kingdom of England, Scotland, Wales and Northern Ireland), though formally an EU member since 1973, did not two decades later adopt the new European currency. The British still have their pounds, coins that display ancient heraldic motifs: a rampant English lion, sovereign (crowned) by divine right, paired with a Scottish unicorn (chained). In currency as in territory, the UK remains apart, an island comfortably cut off from “the Continent” by the English Channel. British resistance to the Euro, whatever its economic rationale, with hindsight appears all too symptomatic.
By national referendum on 23 June 2016, a narrow majority among 33 million voting UK citizens cast ballots to leave the European Union. The Leave vote dealt a blow to ideals of supra-national comity and economic unity enshrined in decades of European treaties and a long-sought single currency. The Leave vote was also a popular rejection of the Remain calls of governmental and business leaders. A year or so later, Brexit proceeds apace: a British national “divorce” from Europe unfolding amid prime-time bickering and complex fiscal-cum-legal squabbles. The why of Brexit, though, is still oddly mysterious and unknowable. Anti-immigrant sentiment, chronic economic anxieties, and free-floating concerns over sovereignty appear as leading tropes, but to many despairing observers, the nation’s decision represents, to quote one headline, a monumental “act of self-harm.”
The very vagueness of the Brexit rationale argues that we consider seriously those facets of the national and the collective that are most meaningful. It feels urgent to regard the nation in all its imaginary splendor, and in terms exceeding constrained narratives of market forces, or the slick tabloid metaphorics that cast states as ill-matched spouses. Amid all the national self-scrutiny and international debate, what do we learn from our music(s)? The present symposium will not aim to gloss the party-political dealings of Theresa, Boris, or Nigel, nor can it soothe the remorse of some voters following a bitterly divisive referendum and its surprise outcome. Our goal is a broader conceptual query about familiar musicological currency, the circulation of our art under the sign of nationhood.
As the Brexit process charges towards its 2019 goal, we do well as musicians and citizens to reconsider pointedly the imposing political abstractions—culture, nation, people, race—governing our daily lives in ways trivial and momentous. The notion of “British music,” I admit, often strikes me as irredeemably cosy, an all but unavoidable supreme fiction among a crowd of invented traditions, canons, and genres. But if national markers of the British are (in every sense of the word) insular, their flow of signs, like the flow of peoples migrating across our planet daily, will never be done. Something called British music—above all in the past century—is knowable only dialectically, through its contacts with neighboring others. A history of British music is unthinkable without recounting plural histories of encounters with all that has been called foreign. British Music and Europe. The most important word in our title is not a proper name or a place, but the space between, defined by an everyday grammatical conjunction. Let’s think about what that and means.