Eric Pritchard and Hsiao-mei Ku are members of the Ciompi Quartet, Duke University's resident string quartet, and are professors in the Department of Music. Harry Davidson is the music director of the Duke Symphony Orchestra.

Prior to coming to Duke in 1995, Eric Pritchard was the First Violinist of the Alexander and Oxford Quartets and served on the faculties of Miami University, San Francisco State University, City University of New York, and the University of North Carolina School of the Arts. Awarded First Prizes at the London International String Quartet Competition and at the Coleman and Fischoff national chamber music competitions, he was also the winner of the National Federation of Music Clubs Award in violin. Pritchard has performed as concerto soloist with orchestras including the Boston Pops and the Orchestra of New England and has served as Concertmaster of the Columbus Symphony, the Opera Company of North Carolina and the Spoleto Festival. A native of Durham, NH, he studied at the New England Conservatory, the Indiana University School of Music and The Juilliard School, where his principal teachers were Joseph Gingold, Ivan Galamian, Eric Rosenblith, and Giorgio Ciompi.

Hsiao-mei Ku, a Naxos Artist, began her professional training at age ten at the Central Conservatory in Beijing, and first appearing on television at the age of eleven. After coming to America, Ms. Ku received her Master of Music degree with distinction and was a recipient of the Performer's Certificate from the School of Music, Indiana University. In addition to her world-wide performing career with the Ciompi Quartet, she has further developed her research/performing interest related to her own heritage- the Chinese culture- and has released two solo CDs, "Violin and Piano Music by Ma Sicong (I) and (II)" from Naxos. Of her performances, Strings Magazine reviewer Greg Cahill wrote: "These expressive works are played exquisitely by violinist Hsiao-mei Ku... This CD features some of the most beautiful recorded chamber music that you will encounter this year, fiercely romantic and filled with heartfelt emotion."

END_OF_DOCUMENT_TOKEN_TO_BE_REPLACED 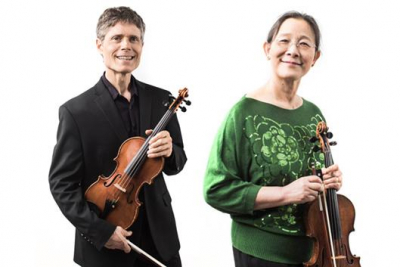