Chris Williams' "I pray the sea" premiered in Australia 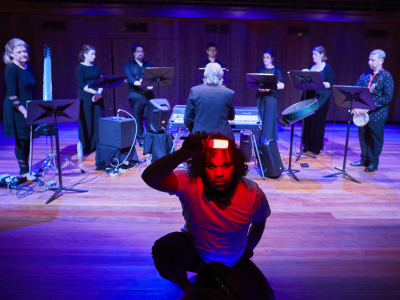 Dancer Neville WiIliams-Boney performs with The Song Company in the production of Arms of Love, featuring Chris Williams' "I pray the sea." (Photo: Keith Saunders)

Ph.D. Composition student Chris Williams' "I pray the sea" was part of The Song Company's production Arms of Love, which toured Australia August 24 - September 4, 2022 with performances in seven cities, including Sydney and Melbourne.

The production interwove the seven cantatas of Dieterich Buxtehude's "Membra Jesu Nostri" with the seven short movements and longer final movement of Williams' "I pray the sea."

"Membra Jesu Nostri" was reimagined with contemporary Indigenous choreography from Karul Projects, and a major new Australian work from Chris Williams, setting words from "No Friend But the Mountains" by Behrouz Boochani. (from The Song Company's website)

The project was commissioned with funding from the Silo Collective.

"This was the kind of concert that can make us sit up and take notice, in which many stories can be interwoven" (Limelight Magazine)

Chris Williams, in his second year of study in the PhD Composition program at Duke University, is a graduate of the Sydney Conservatorium of Music and completed a Master of Philosophy in composition at the University of Oxford, studying with Professor Robert Saxton. In 2012 he was commissioned by Carnegie Hall where he worked with composer-in residence Kaija Saariaho. Previously, Chris was one of only six composers worldwide to be selected by Sir Peter Maxwell Davies to attend his Advanced Composition course at the Dartington International Summer School. He is a graduate of the Sydney Conservatorium and was the inaugural Friends of the National Library of Australia Creative Arts Fellow. He is an Associate Artist at the Australian Music Centre.