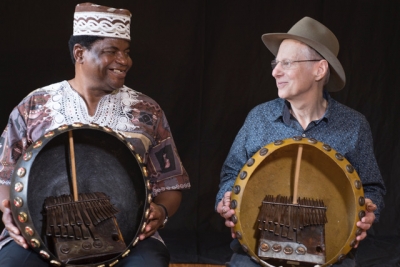 On July 10, 2020 the world lost one of its great musicians, mentors, and cultural ambassadors, and a friend of Duke University, Zimbabwean mbira master Cosmas Magaya. In North America, Europe, and Africa where he performed, he was universally loved by his following not only for his inspired virtuosity and expressivity, but for his generosity of spirit. The cause of death was the novel coronavirus.

A virtuoso from an early age, Cosmas Magaya was a key player in the renowned mbira ensemble, Mhuri yekwaRwizi, led by singer Hakurotwi Mude. He performed both for Shona religious ceremonies, and for the concert stage. Initially sponsored to the USA by the Kutsinhira Cultural Arts Center in the early 1990s, Cosmas subsequently traveled regularly for performances, teaching workshops, and university residencies. He was a regular visitor to Duke, performing here in 1999, and several times thereafter. Our students had the privilege of learning from him during semester-long teaching residencies in the music department in 2008 and 2016; and on multiple shorter visits over the past two decades.

At home in Zimbabwe, his richly textured life encompassed avid farming, multiple terms as village headman, and director of Nhimbe for Progress, a non-profit organization engaged with rural development and emergency relief. His talents were first showcased internationally in the 1970s on the recordings The Soul of Mbira and Shona Mbira Music, and subsequently, on the independently produced CDs Afamba Apota (2000, with singer and mbira player Beauler Dyoko) and Anoyimba (2002). In 1999, he was featured on a national tour of the States with the Zimbabwe Group Leaders Mbira Ensemble. Over the decades, he was a guiding presence at the annual North American Zimbabwe Music Festival (Zimfest).

Magaya was deeply committed to Shona cultural knowledge and its documentation, working alongside his friend, student, and musical associate, professor emeritus Paul Berliner, for fifty years. His life and artistry is commemorated in The Art of Mbira: Musical Inheritance and Legacy (Berliner 2020), released only months before his passing, and a forthcoming players’ method book, Mbira’s Restless Dance: An Archive of Improvisation (Berliner and Magaya, 2020) by the University of Chicago Press. (Photo above: Magaya and Berliner, credit: Rhonda Klevansky)

We mourn his loss.