Huijuan Ling and Jason Mulligan are recipients of the awards, given by the American Academy of Arts & Letters. 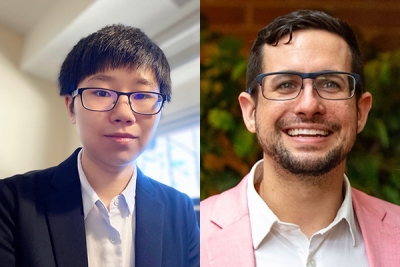 Ling and Mulligan have received two of only six Charles Ives Scholarships given this year. This is the first time two fellows in the Duke graduate composition program have been awarded this distinction in the same year.  The scholarships, in the amount of $7500 each, will be used by the composers to help support attending music festivals this summer, as well as purchasing compositional materials necessary for their work. Both Ling and Mulligan are currently Ph.D. students in Composition at Duke, studying with Stephen Jaffe. In making their determinations, the Academy of Arts and Letters Music jury reviewed students’ submission of recorded and written music, which in this case consisted of recordings made at Duke by visiting artists.

Huijuan Ling is a Chinese composer of contemporary concert music whose work has been heard across China, the US, Canada, and Italy, with major performance and commissions from the Shanghai Philharmonia Orchestra, CCM Philharmonia Orchestra, Seven Hills Sinfonietta, JACK Quartet, Line Upon Line Percussion, and Patchwork Duo. In 2019, she won the third prize in the SIMM 2019 International Harpsichord Composition Competition; in 2016, she was a finalist in the CCM Orchestral Composition Competition; and in 2011, she won the Distinguished Work in Experimental Music Award from the Shanghai Conservatory of Music (SHCM). Her works have been presented in calls for scores and conferences such as Nief-Norf Summer Festival, Line Upon Line Winter Composer Festival, and Midwest Composer's Symposium (2015, 2016).

Jason Mulligan is a composer seeking to explore how to blend the western classical tradition with the issues and sensibilities of 21st century life.  A native of Dallas, Jason studied music composition at the University of Miami and Peabody Conservatory with Scott Stinson and Kevin Puts, respectively.  His music has been performed around the country at festivals and institutions including, Source Song Festival, ICA Clarinetfest!, Southern Methodist University, Northern Illinois University, Idyllwild Arts Academy, Emporia State University, New American Voices, and the Opera America National Opera Center. Jason's 2019-2020 season includes premieres at the International Double Reed Society Conference, the International Horn Symposium, and the International Clarinet Association Clarinetfest as well as at Emporia State University, Florida International University, and Southern Methodist University.