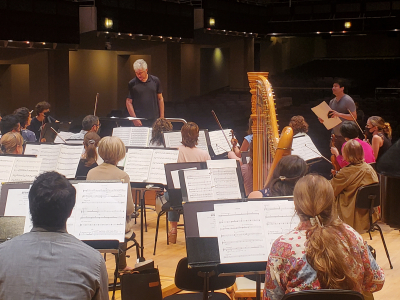 On May 31, the North Carolina Symphony, conducted by music director laureate Grant Llewellyn, recorded new works by Duke graduate composers James Chu (nobilette) and Huijuan Ling (Silence In Between). Chu and Ling were selected by Music faculty to participate in the ongoing Reading-Recording Program funded by the Duke University Department of Music and in particular through a donation from Dr. Penka Kouneva, Ph.D. 1997.

This partnership between the NC Symphony and Duke University is significant, said Stephen Jaffe, Mary D. B. T. and James H. Semans Distinguished Professor of Music Composition, because reading-rehearsing and recording with graduate composers makes "the resources of a professional orchestra available for the students’ exploration."

What made this occasion different from recording sessions in previous years, he added, is that "following Grant’s consultation with both students in January 2020, the readings were postponed due to Covid, and could not be rescheduled for two more years. We’re grateful for the orchestra’s return, and for their agreement to resume this forum for tremendous learning and exploration."

Chu and Ling both share Jaffe's view that this opportunity is a unique and valuable facet of their graduate experience. "It's always a privilege to write for a full orchestra," Ling said. "It takes a lot of effort writing for such a large ensemble, and no composer wants to spend months doing it and then put the piece in a drawer hoping that one day it's going to get played. The reading is a wonderful opportunity to hear the piece come to life."

"Witnessing so many wonderful musicians playing together was such an affirming experience," said Chu. "I am grateful for everyone who helped bring this project to life and am touched by the symphony’s artistry and generosity."

In one sense, nobilette is about a music that moves onward, and in another sense, it is about memory.

The piece progresses in a form that ultimate suggests an onward theatre, yet all the materials circle back to the original theme presented at the beginning. In the context of memory, I wondered how such a journey might relate to the listener’s own relationship with the past and present, memory and nostalgia. The title comes from ‘nobile’ (referring to noble character as opposed to aristocrat) and the suffix, ‘ette’ (a petite version of something) – a smaller sense of noble. In some ways the piece is about moving onward from a smaller place into a grander one.

Huijuan Ling: Silence In Between

Silence In Between is inspired by the process of dissolution—I find it fascinating to see an effervescent tablet or a drop of food coloring gradually dissolving into water. Inspired by this idea, the piece is entirely built on four progressions and extensions of them (in a very liberal sense, see notes below). Those four progressions are elaborated, stretched, stacked vertically, or laid out linearly. Starting from the beginning, the dissolving process of these four progressions gradually slows down canonically, diminishing along the way, and almost reaches a single-note state in the “Still Center” section. Then these progressions build back up from there, finally reaching the final “Unravel” section, which reveals the piece’s only melodic idea. Therefore the piece can be considered to realize a “V” structure: instead of developing, the music unfolds through thinning out, slowing down, then gradually building back up.

Toru Takemitsu stated in his book Confronting Silence that “the dolphins’ communication takes place, not in their sounds, but in the length of silences between the sounds.” I find this statement to be very inspiring, hence the title of this piece. Therefore the full structure of this piece is: four parallels dissolving slowly, reaching the “silence in between,” then “un-dissolving” back up toward the end.