October 27, 7:00pm
Duke Music masterclasses are free and open to the public.

Alan Harris is Distinguished Professor Emeritus of Violoncello at the Eastman School of Music. He received a bachelor's degree from the University of Kansas, and a master's degree and Performer's Certificate from Indiana University, studying with Raymond Stuhl and Janos Starker.

He began his long association with Eastman, and with Rochester, in 1965, when he was also hired as assistant principal cellist of the Rochester Philharmonic Orchestra, where he played until 1969. During his time Rochester he performed with the Cleveland Quartet, the Eastman Quartet, and Rochester Chamber Soloists, and served as principal cellist for the Rochester Chamber Orchestra and the Eastman Chamber Orchestra. He taught at Eastman from 1965 to 1976, 1986 to 1987, 1994 to 1998, and from 1999 until his retirement in 2018. He has given, and continues to give, master classes, solo and chamber music performances throughout the United States.

Duke Music prioritizes the health and safety of our extended community. We strongly encourage all individuals to be fully vaccinated before attending performances & other events in our venues. University, local, and state regulations are subject to change on short notice depending on public health conditions.
Guidelines for Duke University campus visitors can be found at https://returnto.duke.edu/campus-visitors/.

END_OF_DOCUMENT_TOKEN_TO_BE_REPLACED 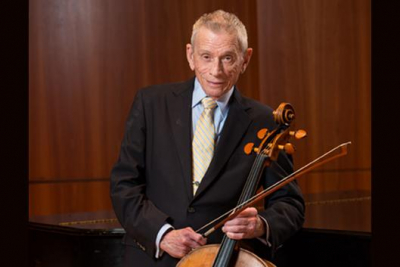