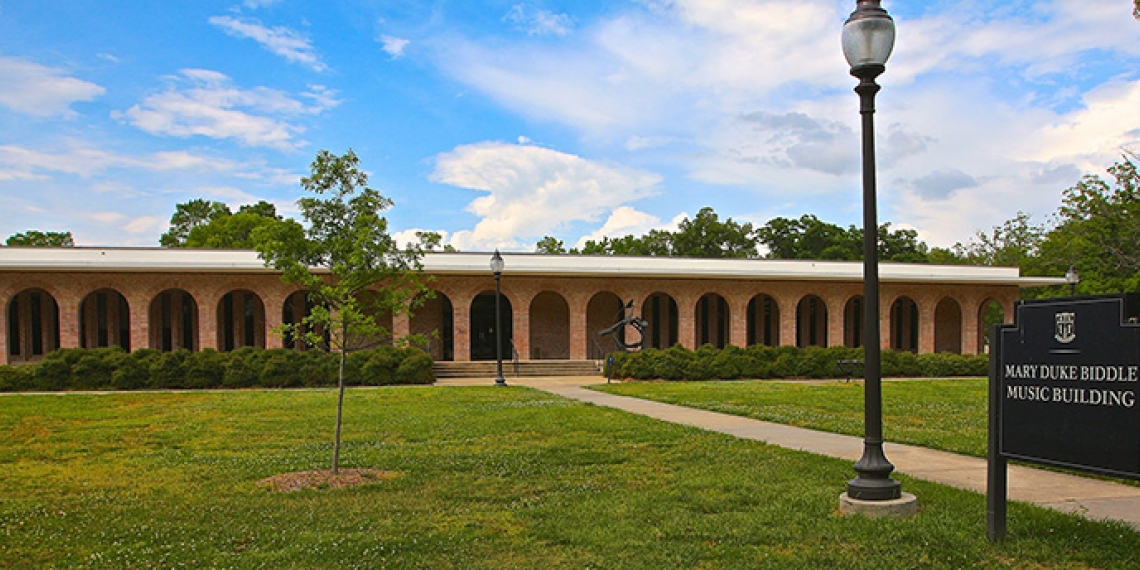 The Department of Music is housed in the Mary Duke Biddle Music Building, which provides superb facilities for its diverse needs. Students meet with instructors in well-equipped classrooms, seminar rooms, and studios. There are 20 practice rooms with grand pianos, four organ practice rooms, several harpsichord practice rooms, ensemble rehearsal studios, and Bone Hall, a large rehearsal hall. The nearby Smith Warehouse houses the Arts, Culture, and Technology Studios where students interested in computer music will find state-of-the-art equipment. Public performances are held in a variety of venues, both on and off campus, including Page Auditorium, Reynolds Industries Theater, and the more intimate Nelson Music Room in the East Duke Building. Baldwin Auditorium, home to the Department of Music's large ensembles, underwent extensive renovations and re-opened in 2013 as a state-of-the-art concert hall.

The Mary Duke Biddle Music Building houses the Music Library with over 100,000 books, scores, journals, and microfilms. The Media Center, with some 30,000 sound recordings and a growing collection of video materials, adjoins a state-of-the-art audio facility which can accommodate 32 listeners. The library's special collections include an archive donated by the Pulitzer prize-winning composer Robert Ward and an extensive collection of research materials assembled by the Viennese music bibliographer Alexander Weinmann. The Music Library's web pages include links to internet resources for music research.

The Duke University Musical Instrument Collections (DUMIC) are also housed in the Mary Duke Biddle Music Building and includes two prominent collections. The G. Norman and Ruth G. Eddy Collection is comprised of over 500 late 18th-, 19th-, and early 20th-century instruments with particular depth in woodwinds, brass, and early pianos, and The Frans and Willemina de Hen-Bijl Collection of Musical Instruments includes over 200 musical instruments from all over the world. The Department also has a variety of wind, string, and percussion instruments available to students for daily practice. Of special interest is an unusual collection of historical instruments. There are no fewer than five tracker organs (Brombaugh, Fisk, Flentrop) in the Music Building, in addition to the four organs in the Chapel which includes the majestic 66-stop Flentrop and the new Italian-style Brombaugh. The collection also includes harpsichords in various historical styles (e.g. German and French doubles by Dowd and Kingston, Italian and Flemish singles by Edskes and Martin), two fortepianos by Smith and Wolff in the Viennese styles circa 1790 and 1820, a bible regal by Bruce Shull, a monochord, Renaissance and Baroque recorders of various sizes, several viole da gamba, sackbuts, krummhorns, and percussion instruments. These instruments are used by faculty and students in classes and for concerts of early music.

In addition to practice rooms in the Mary Duke Biddle Music Building, on West Campus there are 8 practice rooms located on the third floor of McClendon Tower, accessible to students with a Duke ID.