The Duke University Wind Symphony travels to Washington, D.C. to perform Vice Provost for the Arts Scott Lindroth’s “Eternity’s Sunrise” in a concert with Langley High School Band, the ensemble that commissioned the work. 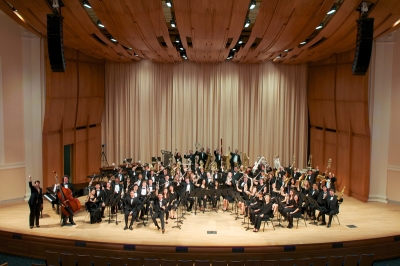 “I had not written for a high school ensemble since I myself was in high school,” says Lindroth.  “As I became more confident that I was writing within the technical abilities of the ensemble, I could free my imagination to write music that truly interested me.  Doug immediately ‘got’ the piece.  He tuned into its emotional arc with incredible insight.  Nothing could be more gratifying for a composer.”

“I commissioned Dr. Lindroth because I love his music and believed he could write something wonderful that my students could play,” says Martin.  “My students grew from the process and absolutely loved it. I believe it is a significant contribution to the repertoire, and that once they hear it, lots of people will want to play it.”

In addition to the joint concert on October 12, the trip to Washington, D.C. will also give the Duke Wind Symphony the unique opportunity to interact with the United States Air Force Band.  “This is one of the most prestigious ensembles in the world,” says Duke Wind Symphony director Mösenbichler-Bryant.  “The students will attend a dress rehearsal ‘performance’ and then participate in masterclasses with USAFB musicians.”

Mösenbichler-Bryant notes the Duke University Wind Symphony has a long tradition of touring, dating back to the days when Professor Emeritus Paul Bryan led the group on semester-long trips to Austria.  “The Austrian tours were life-changing for many of the participating Duke students,” she says.  “It is a tradition I’m eager to continue.  Two years ago, the Wind Symphony started touring again, spending several days in Atlanta collaborating with the Kennesaw State Wind Ensemble. Our tour this year to Washington, D.C. will present the Duke University Wind Symphony on a national level.”

Duke in Washington, the university’s academic and outreach center in D.C., and many area alumni are lending their support to the Wind Symphony tour.  This project is also supported by  the Office of the Vice Provost for the Arts of Duke University, the Duke Music Department , the Paul Bryan Endowment , the Viennese Ball Fundraiser , and the Duke Alumni Association.

Those unable to travel to Washington can hear “Eternity’s Sunrise” on Oct. 8, when the Duke Wind Symphony performs its first concert of the season at 8 pm in Baldwin Auditorium on the Duke campus.