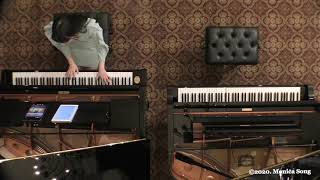 Last summer, Hye-Bin (Monica) Song recorded her own composition, Blanche-Neige, in Bösendorfer Hall at Ruggero Piano in Raleigh, NC. She also recorded Francis Poulenc's Piano Sonata for Four Hands, and Edward Burlingame Hill's Jazz Study No. 1. All three of these videos are part of Song's One Pianist at Two Pianos series, in which she used recording technology to perform four hands duets with herself using two of Ruggero's pianos.

Song said, "For this project, I wanted to create an ensemble consisting solely of one player performing two piano, four hands duets. One of the primary challenges of ensemble playing is blending the sound of each instrument and each musician's individual performing style. I envisioned the One Pianist at Two Pianos project as an experiment in creating more unity of sound by sharing the same musical temperatures between both pianos."

Song's composition, Blanche-Neige, consists of 15 short piano pieces that depict the soundscape of “Little Snow-White,” the original version of the Snow White story published in 1812 by the Grimm Brothers. This collection was designed to “see” the story through the sound, influenced by French Impressionism and Neo-Classicist sentiments.

Song extends her thanks to Ruggero Piano for providing an exclusive Bösendorfer (from the Marquetry Series) and a Yamaha Disklavier, as well as engineers who provided technical support - Zachery Rowe (Ruggero), Brooks Frederickson (Duke University), Mack Geary (www.TunesRecordingStudio.com) - for making these video recordings possible.

Hye-Bin (Monica) Song is a Staff Accompanist in the Duke University Department of Music and Accompanist to the Duke Chorale.