In 2006, Duke composition alumnus Nathaniel Stookey approached his high school friend Daniel Handler to collaborate on a new project: a symphonic piece that introduces young people to the instruments of the orchestra. Mr. Handler, who allegedly manages all legal, literary and social matters for children's author Lemony Snicket, found the opportunity intriguing, and the pair received a San Francisco Symphony commission for The Composer is Dead in 2006. In the vein of Prokoviev’s Peter and the Wolf, The Composer is Dead leads young and old alike through lighthearted murder-mystery mayhem as The Inspector investigates the orchestra sections for clues to the Composer’s demise. The North Carolina Symphony presents the work as part of its Young People’s Series with two performances on March 8, 2008.

At Duke, Stookey’s talents and efforts were recognized with a Mary Duke Biddle Fellowship and the William Klenz Prize for composition.  Even before arriving at Duke, Stookey’s composition career received an early jump-start with the San Francisco Symphony’s "New and Unusual Music Series": at 17, Stookey was the youngest composer to be honored with that commission.  Through various projects Stookey worked with groups ranging from The Mars Volta to thePhiladelphia Orchestra and the Lindsay Quartet.  Double, his concerto for two violins and orchestra, was the millennium commission for Music in the Round’s Festival of 999 Years of Music in Sheffield, England.  Stookey’s chamber music has been featured around the United States and Europe, including at the 2005 Mendelssohn Festtage in Leipzig.  Through various commissions and residencies, Stookey served as faculty member at the University of Sheffield (UK) and The University of North Carolina at Chapel Hill, and was Artistic Director of the Composers-in-Context Series for NPR affiliate WUNC-FM. 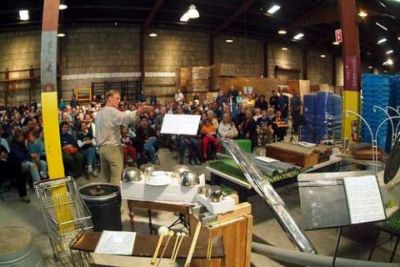 Stookey’s 2007 Artist-in-Residence appointment with the San Francisco Recycling and Disposal Company resulted in Junkestra, which the composer describes as “an orchestral piece written for things that I found on the floor of the dumps transfer station.”  Inspired by an old playground set, Stookey reinterpreted so-called "garbage" into orchestral instruments. Hear Junkestra and a CBS podcast on the piece through his SF Recycling Artist Statement page. ​

The Composer is Dead has been programmed by the Toronto Symphony, Philadelphia Orchestra, Chicago Civic Orchestra, the Los Angeles Philharmonic and Dallas Symphony.  For tickets to the North Carolina Symphony’s performance, see the North Carolina Symphony webpage on its Young People's Series. The Composer is Dead will be released by HarperCollins in November 2008 in a recording featuring Lemony Snicket and the San Francisco Symphony, conducted by Edwin Outwater. Stookey’s music is published by G. Schirmer and PRB Productions.