On Friday, January 16th, DUMIC presented a concert celebrating the arrival of our newest acquisitions. Duke faculty Eric Pritchard and Andrew Bonner played using our new baroque violins and bows, and were accompanied by William Conable on baroque cello and Elaine Funaro on harpsichord. They performed works for solo and duo violins, as well as pieces for violins and cello and all four instruments.

What was most special about this event is that the men and women and their families who gave us these generous gifts were able to attend this concert and share their history with the instruments with our guests. We were also lucky to have John Montgomery, who restored each of the violins, in attendance at this event.

Miriam Herin gave us a violin that gave her hope during a time in her life when money was tight. In the program from the concert, she told her violin’s story:

In 1971, my violin was stolen in New York City. It wasn’t a valuable instrument, but a student instrument purchased when I was in 8th grade from the limited means of my parents. I was married in 1971 and my husband Tom and I were both finishing graduate degrees. Our income came from scholarships (his) and part-time teaching (mine). We weren’t certain we could afford to replace the violin, but that Thanksgiving we travelled to northern Virginia and stopped on the way at the Weaver House of Violin in D.C., the foremost violin shop in the area at the time.

I doubted there was anything we could afford there, but it was a place to start. One of the Weavers mentioned that my former teacher in Arlington was holding a very old violin that belonged to a woman in her eighties who wished to sell it for $800. That seemed a lot of money to us in 1971, but I gave my teacher a call and he invited us to come by and look at it. When we reached his house, he told us that the violin’s owner had decided to sell it to us for $400. “She wants it to have a good home,” he said.

Two years ago Tom and I asked Raleigh’s John Montgomery to appraise the violin because I felt the instrument should be with someone actively playing. Mr. Montgomery suggested Duke University might be willing to buy it. We were thrilled with that possibility but chose instead to donate the violin to Duke, not only because Tom is a Duke alum but because I too wanted it to have a good home. We are so pleased that it does.

Bill Werdel's violin immigrated to the United States with his family in the mid-19th century. He shared its story with us:

I believe the violin arrived in this country in the 1860s when the two patriarchs of our family arrived in the US. After their arrival they migrated to the Midwest and to California where there were jobs. I presume that the violin was handed on from generation to generation. My father, Wilfred Peter Werdel, taught himself to play the violin, and so in a family of 9 children, the violin went to him. My memory is that he played very well. I have fond childhood memories of my father and mother (she played the piano) playing duets in the evening as I fell asleep. The Werdel family is happy to have arranged a home for our violin at Duke, where it will be treasured and played as it should be.

We are honored to have both of these violins in our collection because they help fill in areas in which our holdings are deficient. These instruments are unique in our collection and we are incredibly lucky to have received them as gifts. 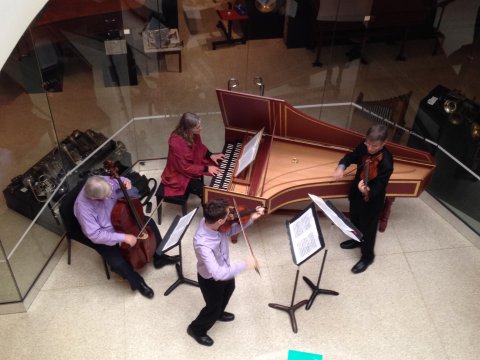