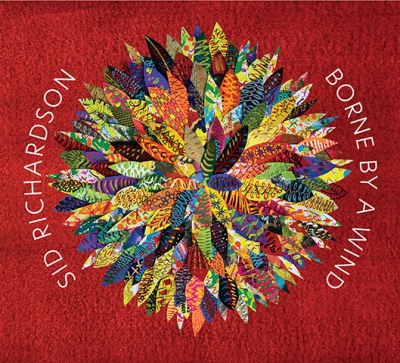 Borne by a Wind will be released on February 12, 2021 on New Focus Recordings.

The works on this debut portrait album are in many cases a direct outgrowth of collaborations made during Richardson's time as a Ph.D. student in Composition at Duke University. Recorded and mixed by Rick Nelson at Duke with support from the Duke University Department of Music, the Office of the Vice Provost for the Arts, and Duke Performances. Mastered by Ryan Streber at Oktaven Audio; album design by Jessica Slaven.

Borne by a Wind explores the point of intersection between music and literature in gritty and original ways, opening with Red Wind (2017), a collaboration with African-American experimentalist poet and National Book Award-winner Nathaniel Mackey that features Mackey as narrator in excerpts from his poetry collection, Blue Fasa, alongside Deviant Septet. Earlier works on the album include There is no sleep so deep (2016), written for and performed by pianist Conrad Tao; LUNE (2015), written for and performed by violinist Lilit Hartunian; and Astrolabe (2014), recorded by Da Capo Chamber Players.

Richardson first met Mackey in February 2015, after hearing the latter discuss Anthony Braxton’s music during a roundtable at Duke. After striking up a conversation post-talk, Richardson began reading Mackey’s oeuvre closely: his poetry, including the 2015 volume Blue Fasa; his jazz-inspired epistolary fiction, such as Bedouin Hornbook and Bass Cathedral; and his music-focused essays, notably “Cante Moro,” “Sound and Sentiment, Sound and Symbol,” and “Breath and Precarity.”

Out of this immersion in Mackey’s work came Red Wind, Richardson’s dissertation piece, a five-movement work written specifically for Deviant Septet, Duke’s ensemble-in-residence between 2015 and 2017. The title is an allusion to “Hofriyati Head Opening,” a poem from Blue Fasa featured in the second movement. Earlier works on Borne by a Wind include a eulogy for Richardson’s grandmother, There is no sleep so deep, an emotionally-charged piano piece inspired by Samuel Beckett’s play Footfalls. It was written for pianist Conrad Tao’s residency at Duke in March 2016, and performed by Tao on this album.  -- from the press release

About Sid Richardson
Sid Richardson's work explores the intersections of music and literature, drawing inspiration from the works of such writers as Beckett, Catullus, Chaucer, Garréta, Longfellow, Keats, Proust, Rimbaud, and Mackey, to create a style that focuses on harmony and timbre. Richardson leverages pre-existing texts to create a metaphorical resonance with the source material in pieces that weave literary elements into their formal, rhythmic, and harmonic structures.

Richardson has collaborated on projects with world renowned artists and ensembles such as Alsarah & the Nubatones, Amarcord, Branford Marsalis, Bill Seaman, Buffalo Philharmonic Orchestra, Conrad Tao, The Da Capo Chamber Players, Del Sol Quartet, Deviant Septet, Sinfonia Salt Lake, and yMusic. He has a special predilection for violin music, and has been fortunate to work with a variety of violinists including Lilit Hartunian, Sarah Griffin, Sarah Plum, Charlotte Munn-Wood, and Misha Vayman. Recent commissions include works for the Aspen Music Festival and School, Tanglewood Music Center, and Utah Arts Festival.

Born and currently based in Boston, Sid Richardson completed his Ph.D. in composition in the Department of Music at Duke University. He holds degrees from Boston Conservatory, Duke University, and Tufts University. Richardson has participated in artist residencies at Crosstown Arts, The Hermitage Artist Retreat, and the Virginia Center for the Creative Arts. In 2017, the American Academy of Arts and Letters awarded Richardson a Charles Ives Scholarship. He was the recipient of the 2018 Hermitage Prize from the Aspen Music Festival and School. In the summer of 2019, Richardson was the Elliott Carter Memorial Composition Fellow at the Tanglewood Music Center. Active as a music educator, he has taught at Wellesley College and the Massachusetts Institute of Technology, and is currently on the composition faculty at the New England Conservatory of Music. Learn more at www.sidrichardsonmusic.com.