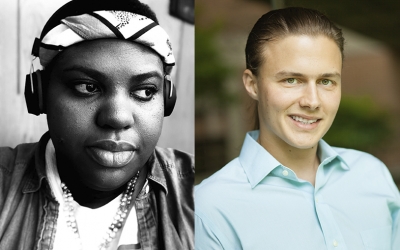 Brittany Green, a current graduate student in Composition, and Sid Richardson (PhD Composition, 2018) were two of four composers chosen as winners of this year's Transient Canvas fellowship. Green and Richardson will each receive a stipend of $1000, three performances of their works, audio/video recordings of the premiere performance, and workshops with Transient Canvas.

Boston-based contemporary duo Transient Canvas is on a mission to revolutionize the modern concert experience. Since 2011, their innovative performances have been praised as “superb” by the Boston Globe and “disarming” by Cleveland Classical, with the San Francisco Chronicle lauding “the versatile imagination they both display and inspire in others.” Bass clarinetist Amy Advocat and marimbist Matt Sharrock relish the creative potential of working with living composers, having amassed a varied repertoire of over 80 commissioned works in addition to working with hundreds of student composers from all over the world. Since 2017, they have hosted their annual paid Composer Fellowship Program that is free and open to composers of all ages.

Brittany Green is pursuing a Ph.D in Music Composition at Duke University as a Deans Graduate Fellow. Described as “cinematic in the best sense” and “searing” (Chicago Classical Review), Brittany’s music works to facilitate collaborative, intimate musical spaces that ignite visceral responses. Her music has been featured at concerts and festivals throughout the United States and Canada, including the Society of Composers National Conference, New York City Electronic Music Festival, SPLICE Institute, the West Fork New Music Festival, Music by Women Festival, and Electroacoustic Barn Dance Festival. Recent projects include collaborations with the International Contemporary Ensemble, Mind on Fire, Experimental Sound Studio, Kate Alexandrite, and The JACK Quartet as an inaugural member of JACK Studio Artists, along with an artist residency with TimeSlips.

Sid Richardson is on the composition faculty at the New England Conservatory of Music. His work explores the intersections of music and literature, drawing inspiration from a wide swath of authors, poets, and playwrights. Sid has participated in artist residencies at Crosstown Arts, The Hermitage Artist Retreat, and the Virginia Center for the Creative Arts. In 2017, The American Academy of Arts and Letters awarded him a Charles Ives Scholarship. He was the recipient of the 2018 Hermitage Prize from the Aspen Music Festival and School, and was the Elliott Carter Memorial Composition Fellow at the Tanglewood Music Center in 2019. In February 2021, he released his debut portrait album, Borne by a Wind, on New Focus Recordings. The record’s cornerstone features Red Wind, a genre-spanning collaboration with poet Nathaniel Mackey and a mixed chamber ensemble of New York-based musicians, and three other chamber works performed by pianist Conrad Tao, violinist Lilit Hartunian, and the Da Capo Chamber Players. The featured works are in many cases a direct outgrowth of collaborations made during Richardson's time as a Ph.D. student at Duke, with support from the Duke University Department of Music, the Office of the Vice Provost for the Arts, and Duke Performances.