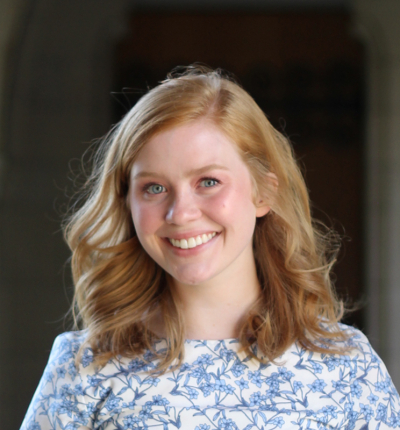 Duke senior Caroline Surrett is a Music minor with an interdepartmental major in Visual & Media Studies and Sociology.

In 1933, the Chicago Symphony premiered composer Florence Price’s award-winning Symphony No. 1. It was a milestone in performance history, making Price the first African-American woman to have a large-scale work presented by a major U.S. orchestra. Although she continued to compose until her death in 1953, many of Price’s subsequent pieces were performed by “women’s symphonies,” all-female ensembles that filled a niche separate from the male space of top professional orchestras.

In October 2019, Caroline Surrett discovered Florence Price when the Duke Symphony Orchestra performed the composer’s Piano Concerto in One Movement with visiting artist and Price scholar Karen Walwyn. Surrett, a sophomore violinist in the group, became fascinated with Price’s music. “This experience made me realize there is so much in this space, this classical music space that I love, that has been left out,” she said.

The realization shaped the trajectory of Surrett’s subsequent studies. Now a senior graduating with an interdepartmental major in Visual & Media Studies and Sociology, and a minor in Music, she says there are two primary questions she has focused on throughout her time at Duke. “First, who decides what is ‘good art’ and why? Second, how can the arts be used in the service of social change and social connection?”

Surrett’s distinction project outside the major, "Shifting the Narrative: Gatekeeping and Marginalization in Classical Music Performance Spaces," engages these questions through the lens of Price’s music. “I love her music and it speaks to me,” Surrett said. “I wanted to give a recital and play her second violin concerto, but I also wanted to bring people together around this music and start a conversation.”

Surrett began her project with an independent study with Professor Harry Davidson, the music director of the Duke Symphony Orchestra. She took a social sciences approach to her research, thanks to her background in sociology. Although Surrett examined numerical data about whose music is being performed and where, those results weren’t the ones that stood out. “I think the most pressing thing, in terms of where the classical music world sits, is the idea of diversity capital— looking at who benefits from diversity initiatives in the world of classical music and who does the labor," she said. "Often, the institutions benefit, but the ones doing the actual work are people of color. Inclusion and equity are more than just saying we’re going to play music by a more diverse body of composers. There has to be structural change within the institutions, as well.”

Pursuing a distinction project in music outside the major has given Surrett the freedom to design a culminating experience her senior year that brings together many aspects of her work at Duke.

“The first half of the program will be a recital of Florence Price’s music, then after the intermission there will be a roundtable discussion," she said "I’ve been given this space by the university, by the department, to start a conversation that means something to me and I hope will also be meaningful to others.”

Duke students can learn more about graduation with distinction for Music majors and non-majors in the undergraduate section.

The public is welcome to attend upcoming distinction project presentations in the Department of Music:

Distinction in the major

Distinction outside the major